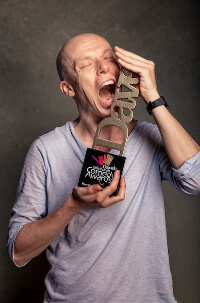 Below are the 2019 eligibility rules. These are updated year on year please check back for all future updates.

Best Comic / Comedy Show
For the funniest, most outstanding, up-and-coming comic / comedy show / act at the Edinburgh Festival Fringe. The prize is £10,000.

Best Newcomer
For the performer or act who is performing their first full-length show (50 minutes or more) at the Edinburgh Festival Fringe. The prize is £5,000. Please note that newcomers are eligible for the Best Comedy Show Award, if that is the Panel’s decision, but no act can appear on both shortlists in the same year.

The shortlists will be announced on Wednesday 21st August 2019

Panel Prize
Like the Fringe itself, there are no rules. Everyone is eligible. It is entirely in the gift of the Panel and Award Director and may not be awarded at all. The prize is £5,000.

2. For both the Edinburgh Best Comedy and Best Newcomer award, the show must be stand-up, character comedy, sketch/revue, comedy musical or cabaret. The material must be unique to the performer / show. Comedy plays are not eligible. Comedy music acts are eligible, but must be performing their own material, not cover numbers, although pastiche and rewriting is eligible. Bill shows are not eligible but where individual acts combine into a single show which is fully inter-relating, it will be judged on overall merit, not on an individual basis. Established acts should have substantially new material since the Edinburgh Festival Fringe 2018. Performing other people’s material e.g. classic Frankie Howard or Bill Hicks, etc. is not eligible. For the avoidance of doubt, 'unique' means material written by the act and their collaborators (co-writer, director, etc).

3. Best Comedy Show
Acts considered to have ’star' status are not eligible for the Edinburgh Best Comedy Award. For the purposes of this Award a ’star' is defined as any act who has starred in a television comedy or light entertainment on a major channel or regularly fills a 500-plus seat venue on their own name. For the avoidance of doubt, major channels are the former terrestrial television channels of BBC1, BBC2, ITV1, Channel 4 and Channel 5 and also Sky 1. One-off or 'guest' appearances in a television comedy or light entertainment series or appearing in shows as a panel member on a major channel where your name is not above the title do not disqualify an act. Please note that these rules apply to all shows including international acts, where the status in their home countries will apply. For the avoidance of doubt, where any grey areas occur, the live rule will be dominant."

5. All shows for both awards must have a listed and playing time of at least 50 minutes.

All shows listed in the Comedy and Cabaret section of the official Edinburgh Festival Fringe Guide are automatically seen for the Best Comedy Show or Best Newcomer award in accordance with these rules. Shows or acts do not need to apply for the awards.

If you are not in the official Edinburgh Festival Fringe Guide and believe you are eligible please contact the awards team on: info@comedyawards.co.uk